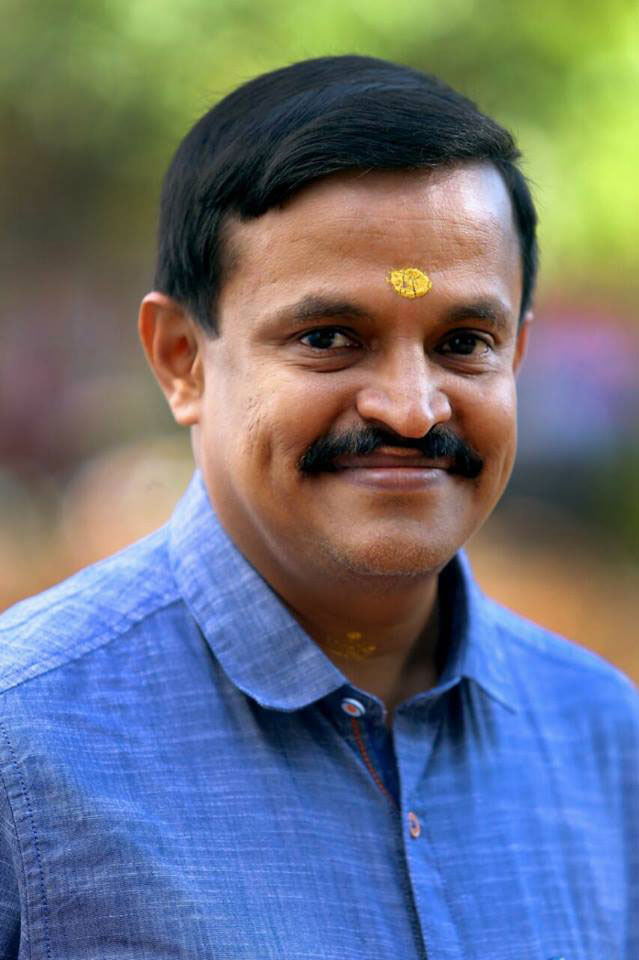 He does not teach, he relates...
There may be many stars, some planets but one sun...." This is so apt to say about Ajith Kumar Raja, the Principal and Director of Sakthan Thampuran College of Mathematics and Arts, Thrissur. Nobody believes when he says that he started this institution with single student in August 4, 1986. When asked, he will say that it is the blessing of Prof M.K Menon, the retired Head of the Department of Physics in St.Thomas College, Thrissur. But through sheer perseverance, indomitable intelligence and immense belief in himself and his teachers, he could steer this institution into its Silver Jubilee in the year 2010-2011. Now almost 7000 students are studying here every year and almost 1 .8 lakh students have completed their studies. But it is his real honour that he aims to encourage those students who stand weak in their studies and he is confident that he can do it with dedication and will power. Hats off to him.
Sri Ajith Kumar is born in October 08, 1964 as the son of Varanakkottu Krishnan Namboothiri and Manakulam Mallika Thampuratty. After completing his schooling in Govt.Model Boys' School in Thrissur, he joined St Thomas College for his higher studies. After his studies he found no other realms to pursue, but only to follow the career of his beloved Guru, Prof. M. K Menon and under the loving care and blessings of his Menon Sir, he started his career as a teacher.

Treading on the path of great teachers, honours are bestowed on this great teacher. He received the Youth Critics Award 2006 through gallop poll for his eminence in making the subject Mathematics highly interesting and simple for the students to grasp. In the year 2007, on the occasion of the 150th Annual Celebrations of the first freedom struggle, the Citizens' Forum has honoured him for his contributions in teaching field on the auspicious function, 'Aadaraneeyam'. There are many more awards such as 'Adhyapaka Ratna', given by Bharathiya Institute of Political Science, in 2008 and 'Adhyapaka Sreshta', by Y'smen Club, Mannuthy in the year 2009. On the ceremonious occasion of St Thomas College, Thrissur, celebrating the 90th anniversary celebrations he was honoured and presented a memento on the occasion. In the year 2009, when the Parallel College Association proposed for an award for the 'Most Popular Principal', there was no other choice but Sri. Ajith Kumar Raja, the students 'Ajith Sir' in the year 2010. The cultural organization 'Shagi Upshot' has honoured him in 'Thrissur Kids' Fest 2010' for his selfless contribution in the social and educational fields. ‘Sakthan Award’ for the eminent teacher by Surasu Memorial Cultural Association in 2012, 'Guru Puraskaram' by Teenage Motivation Centre,’Guruvandanam’ by Thapasya Organization on their 40th anniversary, 'Ganithachaarya Award' by Mannuthy Welfare Charitable Trust, Samarpanam Award ' by Manishada Organization are some of the honours he received in the year 2016. In 2017, Mr .Ajith Kumar Raja received the awards of P.R Krishnan Master [Ex –M.L.A] Memorial Award and ‘The Gurushreshta Award ‘ by Vayalar Ramavarma Foundation. The great teacher was honoured with the awards like Malayali Mudra , Sandipani Puraskaram, Sri. C. Achutha Menon award, Vasudeva Kudumbakam Award, Mathruka Adhyapaka Dampathi Award by the State PTA in the year 2018.

We do not remember days, we remember moments. Sri.Ajith Kumar Raja was one of the prestigious delegates from Kerala in Delhi in the year 1979, which was celebrated as the Children's year. He is very interested in cultural activities also. During his school days he was the first prize winner of 'Aksharaslokam' in the state school youth festival for two times and second prize for twice. He won first prize in the same item for 5 times on University levels. He has bagged many gold medals on 'Aksharaslokam' and took part on the competition of gold medalists in this item and won the Fashion Trophy [silver]. As a versatile genius, Ajith Kumar Raja has won many prizes in story writing, versification, recitation, light music, drama in which he proved to be the best actor. Chess is one of the most interested sports items for him. He also participated in International Chess Tournament conducted in Sri Lanka. He is a legend on the field of Vedic Mathematics. He also inspires students in this field by taking classes all over Kerala and U.A.E.

Mr. Ajith Kumar Raja is residing at Manakkulam Palace, Gandhiji Nagar behind Olari Temple, Olarikkara Thrissur. The house does not rest upon the ground, but upon a woman. This proves to be a gift to Sri Ajith Kumar Raja. He has a strong and love bound support of his wife, Renuka Raja who is working with him in Sakthan Thampuran College. He is blessed with two sons, Rohith Raja and Rahul Raja, who have proved to be the very followers of the previous Chess Champion.